Our DMV application has been approved!!! We’re going to Burning Man, baybee! 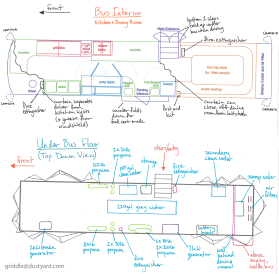 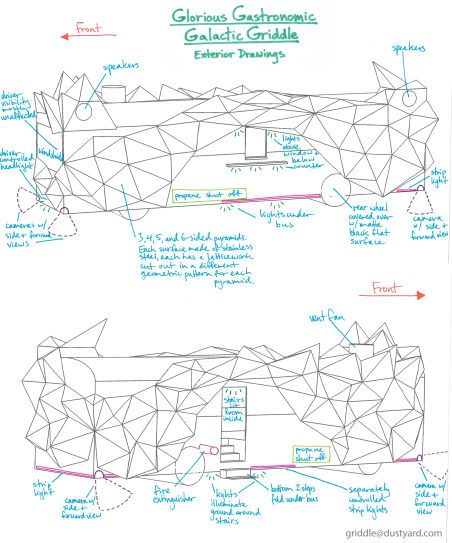 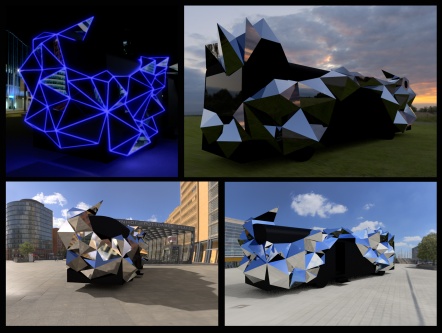 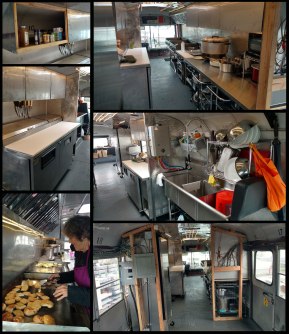 In the process of writing up the application we got the CAD model of the exterior done too. Our baby is taking shape!

Now just cross your fingers that they like it. And that we can build it.

We have names for the camp and the art car!

is our camp name, and

is the name of our art car (G-Spot for short),

It started with a box. A long, slender, matte-black box. Looks didn’t matter, these people had a mission. As they wandered far and wide, the box began to grow things. Like barnacles on a whale, the box acquired shiny, geometric, phosphorescent bumps. Occasionally the workers would get around to scrubbing them off, but really they didn’t care so much. Feeding strangers was all that mattered.

One day a stranger came up to the box. “I was drawn to the shiny lightey spikey things,” the stranger said. “Oh!” said the workers, and invited the stranger in to eat. From that day on, the workers and the shiny lightey barnacley crystaley spiky things lived happily in a symbiotic relationship – the barnacles drawing people in for the restaurant and in return getting… whatever it is that barnacles need from a wandering restaurant that would otherwise just be a long black box.

The First Church is founded on the principle that sometimes strangers are hungry. 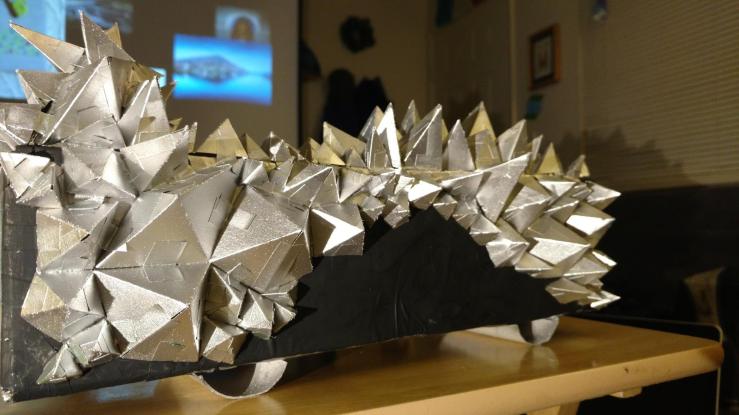 Concept model for the outside design of the bus, made by Devon. The idea is we’ll take stainless steel and attach it to the bus with hinges so that it can lay flat while we’re driving around and then quickly turned into these pyramids when we get to playa. Lights will be permanently attached to the edges of the pyramids and the troughs between.

We moved away from previous ideas for a few reasons, but the most important right now is that we need something we can actually build in the time we have left to build it. I think this concept looks pretty neat and I think fabrication will be comparatively doable.

(The stainless is inspired by an enormous stack of stainless someone is selling on craigslist super cheap. We’ve been using it all over the kitchen and Nathan learned to weld it and we just really really like it as a material to work with. And it’s flipping gorgeous.)

Next step is to model it in the computer and work toward a buildable design. Exciting times!

Overall plan for the rest of the project. We’re organizing around big events: Brett’s Birthday Party, a Field Trip in early May, Fourth of Juplaya, and then Burning Man. That gives us 4 chunks of time at roughly 1.5 months each. Lots of work to do, but I think we can do it!

Mark your calendars now for the events. Plan to come for whatever portion of each you can. Vickie will figure out dates for the Field Trip, and she’ll also be planning Brett’s Birthday Party in the next week or two.

Electrical panel is wired. Breakers are in, and everything is ready to go on that part. Now just to finish up the wire terminations. 120v Electrical should be done by the end of the week.

We’re taking out the windows in the kitchen area and putting up one big sheet of stainless on each side. Right side is up, left side to come. (These sheets are huge – something like 140 pounds, 17 feet long, 30 inches wide.) Also, wiring is going in. And the workspace in the warehouse is getting a little more organized. And Gypsy is adorable.